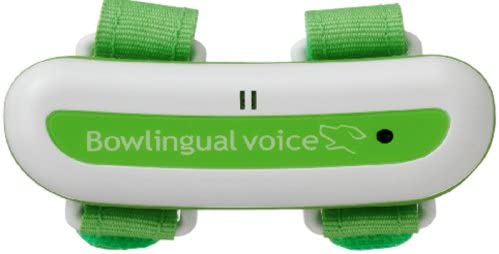 Have you ever thought of having a dog translator in the future like what we watch on tv and movies?  This might become true in the future and now, a Bowlingual has been made. I did not expect that there is such a thing and when my friend played with his dog, he showed me this Japanese dog gadget. Good thing, you can order it through Ebay US.

Good news though, other Takara Tomy dog translator products and Bowlingual iPhone app are available in English and I want to try their other gadgets soon.  Still, I want to write this review so Japanese language learners and dog lovers will know how it is to use this dog device. It will be a nice read too if you are fascinated about having dog translators.

Takara Tomy Bowlingual, a toy product from Japan, is a handheld device where you can confirm what your dog really says. It is like a dog emotions reader and what I know, it can recognize barks from about fifty dog breeds. A good use too for dog sitters or a non-dog lover who must take care of a friend’s dog temporarily and is learning Japanese.

Before you spend your money on this cool Bowlingual dog voice translator, I will share to you my toy or dog tech gadget experience based on what I saw when I stayed on my friend’s apartment in Japan.

Japan, one of the world’s high-tech countries and producer of almost perfection high-quality products, created a cute and at the same time cool Bowlingual dog bark translator. The creator of Bowlingual is Takara, a toy company in Japan. They specialize in creating toy animal robots and video games. Bowlingual was mentioned on Time Magazine as one of the best inventions in 2002. Takara and Tomy, both toy companies, merged in 2005 that is why they are now called Takara Tomy. This Bowlingual translator device is the improved version of the 2002 Bowlingual model where the product looks like a walkie talkie that comes with a dog collar mic. Some dog owners on the park are having fun using their Bowlingual to translate dog conversations and have a friendly chit chat with fellow dog owners.

Back to Bowlingual, buyers from Japan rated this 3.9 out of 5 stars on Amazon. This might be a great pet product, right? With 12 ratings, I think it is if I did not try that yet.  To answer if this gadget really translates dog barks, let’s go to know more and read my review!

Clip the dog collar mic to your pooch’s collar and the Bowlingual translator will catch the dog barks and noises to understand and translate via LCD the dog language to us humans.  You can enjoy it as a toy by having a fun interaction with your doggie.  Just have your handheld device near your dog, your dog barks then the device will load and poof! The phrase will show on the LCD screen and at the same time, there’s also a happy voice reading it. Then, a cute dog face will appear.

Aside from being a translator, it can serve as a dog answering machine when you miss your furry companion and you want to remember his barks and feelings while you are away from home.

Takara Tomy Bowlingual Voice is a novelty dog tech toy and not a word by word dog translator. It is not a literal dog word interpreter such as Hey Mark come to me! I hate this mailman! I want to eat those tacos, and many more specific sentences. What it can translate and display are Japanese phrases and expressions on the screen like the usual your I am happy, I want to eat, I am feeling good and many more Japanese kawaii or cute phrases based on the barks. A nice item to use when interacting and playing with your doggo.

Still, a good device when in training or when you want to remember your dog’s barks, emotions and what he wants to convey. The dog tech product features a dog quiz and can organize a schedule for veterinarian visits or walks on the park. This is a nice small organizer too for toy dog owners who wanted to be reminded about dog spa or salon appointments.

If it is available in other languages particularly English, I think many dog lovers especially the ones with kids will surely love this stuff.  What I read is Takara Tomy are distributing Hasbro products in Japan and who knows, they might think of having an English version of Bowlingual dog bark translator soon.